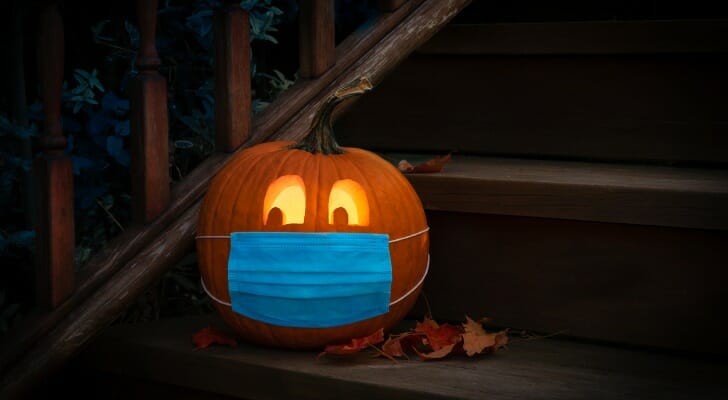 Halloween typically scares up a major boost in U.S. consumer spending, to the tune of $8.78 billion in 2019, according to the National Retail Federation. Though this yearâs celebration will be scaled down in light of the COVID-19 pandemic, the trade group still projects that Americans will shell out $8.05 billion on things like candy, costumes, decorations and greeting cards. Despite the fact that many city governments are discouraging trick-or-treating and the CDC is recommending extensive safety guidelines, itâs still possible for families to get in the spirit of the holiday with the proper protocols in place. Whether youâre planning to don costumes and go house to house with your pod or attend a Zoom masquerade, not all locations are equally conducive to enjoying the festivities. Thatâs why SmartAsset crunched the numbers to find the best cities in the U.S. to celebrate Halloween in 2020.

To do this, we analyzed data for a total of 210 cities. We considered a range of metrics that we grouped into four categories: family friendliness, safety, weather and candy & costumes. For this yearâs study, we included metrics like internet connection and recent COVID-19 infection rates to account for the different ways Americans will celebrate the holiday as a result of the pandemic. For details on our data sources and how we put all the information together to create our final rankings, check out the Data and Methodology section below. 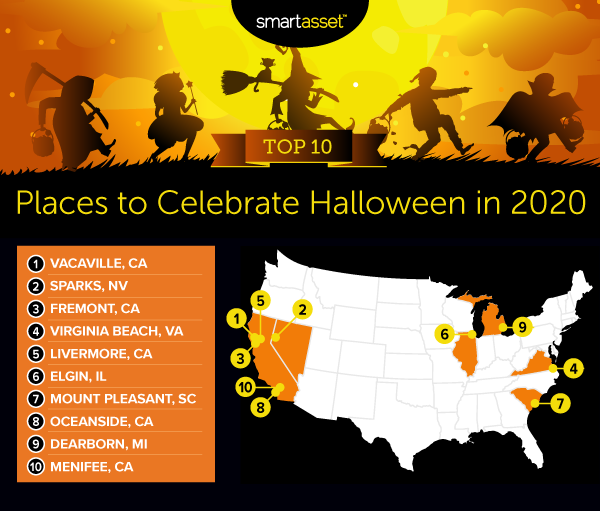 The best place to celebrate Halloween in 2020 is Vacaville, California. There are a study-topping 13.94 candy stores per 10,000 total establishments in Vacaville, which ensures trick-or-treaters will have plenty of sweet options to stick in their pumpkin pails and pillowcases. This, combined with a ranking of 38th out of 210 for the 34.84 costume shops per 10,000 total establishments (a top-quintile ranking), puts Vacaville at ninth in the candy & costumes index for this study. The city also finishes 32nd overall for the safety index, which includes a daily COVID-19 infection rate of 8.27 per 100,000 residents, 58th out of 210.

Trick-or-treaters who donât have warm or waterproof costumes can rejoice: Sparks, Nevada has the fifth-best ranking for the weather category in this study. That includes a precipitation probability of just 1.0% on Halloween (ranking ninth out of 210) and an average temperature that is just 3.4 degrees off the ideal Halloween temperature of 60 (ranking 44th out of 210). Nearly 22% of the population in Sparks is younger than 14, the 33rd-highest percentage for this metric in the study and an indication that youngsters will have many in their demographic available to participate in some spooky fun.

Fremont, California ranks fourth in our study for the safety category. It is tied for the third-lowest rate of new COVID-19 infections in the study, at 3.31 each day per 100,000 residents. Fremont also finishes 24th out of 210 in terms of its relatively low violent crime rate, with just 211 cases per 100,000 residents each year. Whatâs more, the city finishes 16th in the family friendliness index, buoyed by a population where 95.07% of homes have internet access, seventh-best in this study and helpful for those who want to take their Monster Mash online.

Virginia Beach, Virginia also scores well in the safety category â ninth-best in the study out of all 210 cities. The violent crime rate in Virginia Beach is particularly low, ranking eighth overall, with just 117 incidents per 100,000 residents each year. In terms of COVID-19 cases, Virginia Beach falls just outside the top quartile, finishing 55th, with 8.16 new cases per 100,000 residents each day. The city also ranks 37th of 210 for its relatively large concentration of costume shops, at almost 35 per 10,000 total establishments.

The third California city in our top 10 is Livermore, located on the Bay Areaâs eastern edge. Livermore ranks third in the safety category, on the strength of being tied for third-fewest new COVID-19 infections, at just 3.31 per 100,000 residents each day. Livermore also has the 21st-lowest rate of violent crime overall (ranking in the best 10% of the study), at 203 incidents per 100,000 residents each year. Furthermore, the city has the 14th-best family friendliness index in the study, powered by an eighth-place ranking for the percentage of homes with internet access, at 95.00%, making it that much easier to use the World Wide Web to show off that homespun spider web decor.

Elgin, Illinois ranks 11th out of 210 in the family friendliness category of our study. Housing costs represent just 19.87% of income on average, the 24th-best percentage for this metric overall. The population is 22.61% children under the age of 14, ranking 26th out of 210. Elgin is also a fairly festive place for Halloween. There are 12.29 candy stores per 10,000 establishments, the fourth-highest rate for this metric in the study.

Mount Pleasant, South Carolina ranks 12th overall for the candy & costumes category out of all 210 cities we analyzed. That includes having 52.93 costume shops per 10,000 establishments, the sixth-highest rate in the study for this metric. Mount Pleasant is also a relatively affordable place to live, having the fifth-lowest housing costs as a percentage of income overall, at just 17.99%.

Although housing costs in Oceanside, California make up 28.02% of income (ranking 193rd out of 210), this coastal city near San Diego has the 14th-best weather index score in the study, which is great news for trick-or-treaters who donât want to be soaked and shivering while theyâre participating in contactless candy pickup. There is just a 1.4% chance of precipitation on Halloween in Oceanside (ranking 19th of 210). Plus, the average temperature there, at 8.2 degrees away from 60 degrees, ranks in the top half of the study.

Dearborn, Michigan finishes in the top 45 for all four data categories we considered, including ranking 33rd of 210 (a top-quintile ranking) for the candy & costumes category. There are 34.57 costume shops for every 10,000 establishments, the 40th-best rate for this metric in the study. Dearborn is also a very young city: It has the fifth-highest percentage of residents younger than age 14, at 24.87%, which might help costumed kiddos feel a little less like the pandemicâs gotten everyone stuck in a real ghost town.

Menifee, California ranks 22nd out of 210 for the candy & costumes category. It has 6.78 candy stores per 10,000 establishments, ranking 32nd overall for this metric. Itâs also unlikely your Halloween will be rained on in Menifee â there is a 0.6% chance of precipitation on Oct. 31, the best rate for this metric across all the cities we examined. 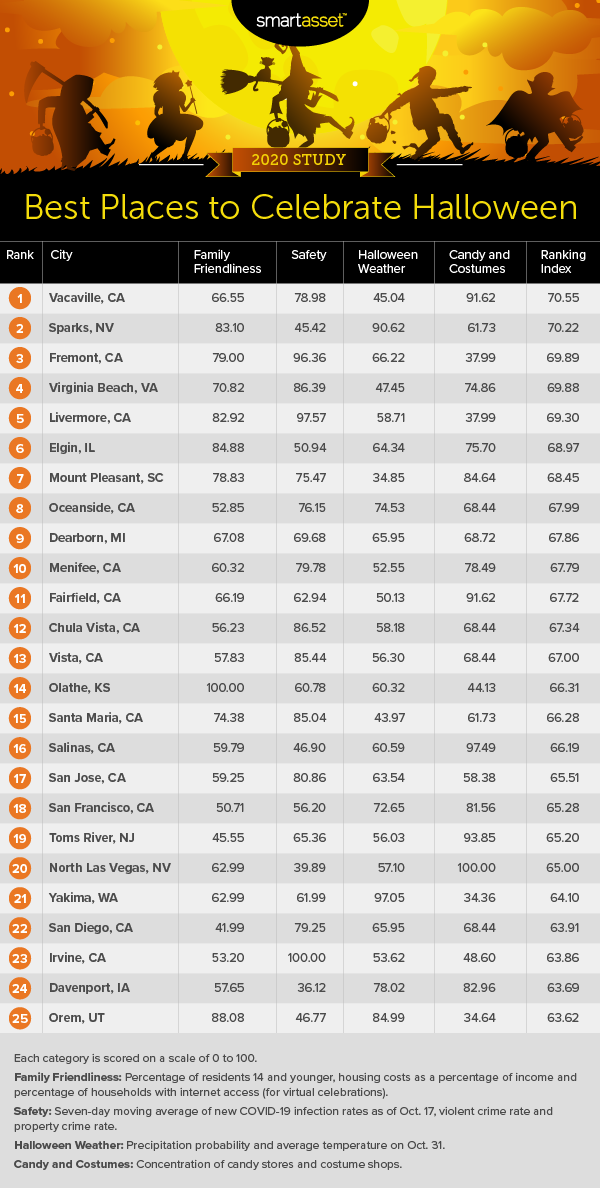 To find the best cities to celebrate Halloween in 2020, we analyzed 210 cities in 10 metrics across four categories:

First, we ranked each city in each metric, assigning equal weight to every metric except for the two crime metrics, which each received a half-weight. Then we averaged the rankings across the four categories listed above. For each category, the city with the highest average ranking received a score of 100. The city with the lowest average ranking received a score of 0. We created our final ranking by calculating each cityâs average score for all three categories.

Tips for Managing Your Money to Avoid Spooky Surprises

The post Best Places to Celebrate Halloween in 2020 appeared first on SmartAsset Blog.