Last Thursday, I returned to Europe for the fourth time in the past ten months. This time, I’m here for work. I’m speaking at yet-another chautauqua about financial independence and early retirement. As always, it’s fascinating — and the people attending the event are amazing.

For this trip, I decided to experiment with ultra-light packing. I am not a minimalist, but I like minimalist travel. I wanted to see if I could carry everything I needed for 20 days of travel in a single small backpack.

After traveling to thirty countries in the past twelve years, I’ve learned that “more is less” when it comes to packing. It’s senseless to carry things you’re not going to use. And most of the time, you don’t need to pack items you’ll find (or can buy) at your destination.

It costs less — physically, mentally, and financially — to travel light.

Here’s a quick look at my current ultra-light packing experiment (and how my packing habits have changed over the past decade).

Since my first overseas trip to England and Ireland in 2007, my packing has…evolved. Twelve years ago, I carried far too much. I brought along anything I thought I could possibly want or need. It was crazy. Then, to make matters worse, I bought a ton of stuff as the trip went along.

By the time I flew home, I was overloaded.

Trip by trip, I’ve learned to pack lighter. By February 2011, this is what I packed for three weeks of travel to southern Africa.

Holy cats! years earlier, I was still carrying all sorts of stuff I didn’t need. My mind is boggled. A radio? Binoculars? $500 cash? Tons of books? What was I thinking?

By the Africa trip, though, I was starting to pack for function rather than form. I still carried some items (including my bags) that I thought looked cool, but in the back of my mind, I’d begun to grasp the concept that fun, efficient travel has little to do with what you pack and everything to do with your experience in the moment. And when you’re burdened by baggage, it’s tough to be in the moment.

Fast-forward three years. Here’s what I packed for fifteen days in Ecuador during late summer 2014. Although I still carried items that went unused, my choices were mostly functional by this point and had little to do with form.

The system I show in this video is still my standard system. In fact, for our trip to Italy and Washington D.C. last month, I used these exact bags. And the items I packed inside the bags were similar to what I was carrying five years ago. (The major difference? I rarely use zip-off pants anymore. I’m not nearly as paranoid as I used to be.)

For my current trip to Portugal, I decided I wanted to experiment with ultra-light packing. Could I compress everything for 20 days of travel into a single “personal item” that fits under an airplane seat? Would I regret taking so little?

Here’s what my ultra-light packing attempt looks like for my current trip to Portugal and California.

For this trip, I’m carrying:

I’ve been on the road for five days day now. It’s been very easy. My biggest complaint is that I don’t have a second pair of footwear. I like to have flip-flops or Birkenstocks with me, and I don’t have those for this trip. (Plus, I had to wash my underwear last night because I’m only traveling with four pairs. Only a minor inconvenience, though.)

My bag is full, but there’s still a little room for me to pick up stuff along the way. That’s good, because I’ve already been given two t-shirts!

Whereas there are often items that go unused in my luggage, this time I’ve used almost everything. I haven’t used my collapsible chopsticks yet (I rarely do, but they don’t take much room) and, surprisingly, I haven’t used my reading glasses. I haven’t used my Kindle yet either, but I suspect I will during the latter half of the trip.

So, that’s my experiment with ultra-light packing. Will I do this again in the future? Yes, I think I will. But only selectively. Ultra-light packing is a terrific option for trips where my environment is relatively constant (I’m mostly in hotels, for instance) and I have no companions.

But on last month’s vacation to Italy, Kim and I had to pack for hot and humid weather, for air-conditioned hotels, for hiking, for business meetings, etcetera. There’s no way I could have fit everything in one small bag. Besides, when I’m traveling with other people, the advantages of packing light are reduced somewhat.

Ultra-light packing is a terrific tool to have at my disposal. It’s easier than you might think. After five days, I’m certain this system will work for the entire twenty-day trip. And I’ll bet nearly anyone could make this work for a weekend. 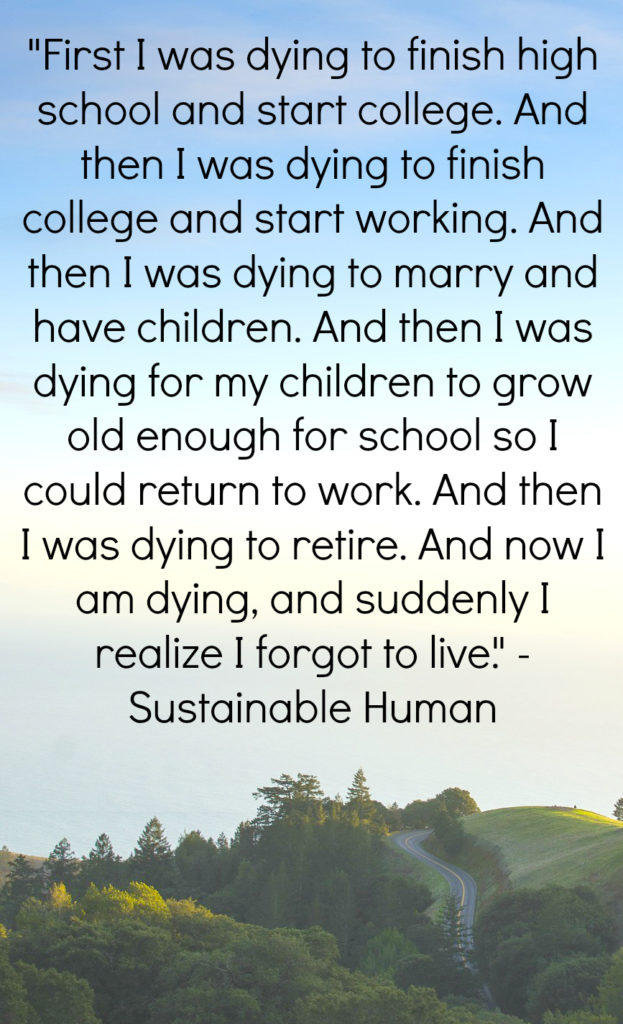 I recently saw this quote and it really made me think.

Pretty much everyone, myself included, is guilty of wanting to rush through life instead of trying to live in the present while also preparing for the future.

When I was younger, I wanted to be older so I could have more money, a bigger house, etc. I wanted to rush through high school, college and so on.

I dreamt of the future and spent much of my time dwelling on that.

It’s easy to focus on what you hope your life will be like, but for me, I am living a better life now because I’m no longer trying to rush towards the next stage thinking that it will be better than the present.

When you are only living in the future, you are stealing your present from yourself. It can be hard, but learning to live in the present means you can see how amazing your life already is.

We all look at the years ahead of us, and perhaps it’s things like wanting your life to speed up so that you can graduate from college, regain your freedom once your children are out of the house, and so on.

However, when was the last time you:

While thinking about the future is important, being able to be happy in the present is truly a gift!

Related reading on how to live in the present:

If you ask anyone older than you about what they regret the most, it’s probably not enjoying life as much as they could.

Instead of rushing through your life to the next phase, you should think about what you can do today to enjoy your life now. And no, you don’t need to spend a fortune to enjoy life – you can do so on a budget.

Life goes by quickly, so finding happiness now is important.

After all, you only have this one chance.

Here are my tips on how to better live in the present and enjoy life:

Are you guilty of wanting to rush life? Are you currently happy and finding ways to live in the present? Why or why not?

The post For Those Who Want Life To Speed Up – Are You Dreaming Too Much About Tomorrow? appeared first on Making Sense Of Cents.

With the 2020 holidays upon us, itâs likely youâve spent some time considering how youâll have a COVID-safe celebration. Should you stay? Should you go? Is travel to your family even an option this year as some states impose new travel restrictions and mandatory quarantine periods?

Perhaps for safetyâs sake, youâve decided to stay put. But you also recognize that being “home for the holidays” doesnât have the same cozy appeal as it used to when youâve already been home working from home for months on end. What you might need is a staycation â the getaway for when you canât get away.

Check out all the answers from our credit card experts.

Get away for the holidays without going away

Subscribe to get the weekâs most important news in your inbox every week.

Keep an eye on your inboxâweâll be sending over your first message soon.

Traditionally, when we think about holiday travel, weâre most likely planning how to get ourselves to a faraway destination â whether thatâs to see family across the country, or to flee from some combination of family, holiday hustles and winter weather.

This year, Iâve personally decided I wonât be among the holiday crowds attempting to fly on the busiest travel days of the year. Instead, Iâll be sticking closer to home, celebrating in my own city with a staycation â and testing a theory that there is no place like a Hyatt for the holidays.

If youâre planning to stay close to home like me, hereâs some good news: Your credit card points work just as well for living it up in luxury in your hometown as they do when youâre on the road.

Some more good news: Youâll save lots of points and dollars by not flying anywhere this holiday â so go ahead and book the suite!

How to use your credit card points to book a staycation

If you live in or near a city, finding a hotel to tuck into for a few days over the holiday period should be pretty straightforward.

To plan a staycation, I normally start by checking whatâs available near me by searching the website for each of the hotel groups in whose loyalty programs I participate.

Here in my hometown of Portland, Oregon, I found plenty of options at varying price points when I looked up Marriott, IHG, Hilton and Hyatt â the four hotel programs in which I currently have points.

For example, a few weeks ago, I decided to take an early holiday staycation at the Hyatt Centric Downtown Portland. I chose the hotel because of its location right in the middle of the city, and because Hyatt has a 25% points-back offer on award stays and free parking for The World of Hyatt Credit Card holders through the end of the year.

I paid 30,000 World of Hyatt points for a two-night stay, got 7,500 points back, and got upgraded to a suite thanks to my World of Hyatt elite status. Without points, the suite would have cost $355 dollars a night â plus the free valet parking saved me another $47 a day. I was able to get a $804 value for 22,500 rewards points. Even though I was less than two miles from my actual house, I felt a world away.

How to use travel rewards to book a staycation

If you donât already have a hotel-branded rewards credit card for earning points in a specific hotel program like World of Hyatt, or if you live in a location where there arenât many chain hotels, youâll likely have more luck booking a staycation using travel rewards points.

Once you find a hotel you want to visit, and before you make the booking, youâll want to check to make sure the hotel amenities that excite you for your staycation are going to be open and accessible.

Other than being snuggled up in a warm bed that I didnât make myself, the best part of my staycation weekend at the Hyatt Centric Portland was the food.

Masia, the hotelâs signature restaurant designed by Portlandâs award-winning Spanish chef Jose Chesa, was finally open and serving after a long COVID closure. Since I live in a city where indoor dining still hasnât made a full comeback (and is now taking a pause for the holiday season), it was a rather delightful experience to spend two mornings lingering over a long breakfast.

If youâre booking more than a week in advance, you should also make sure your reservation is flexible or cancelable should your own plans change, or the COVID regulations in your state or county change and require the hotel to amend their offerings. 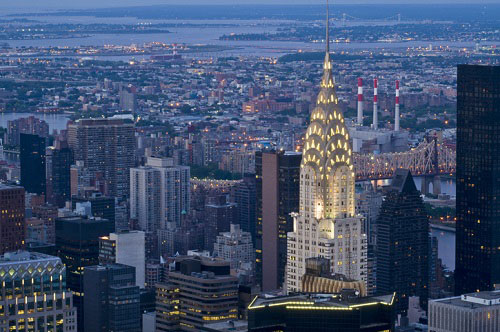